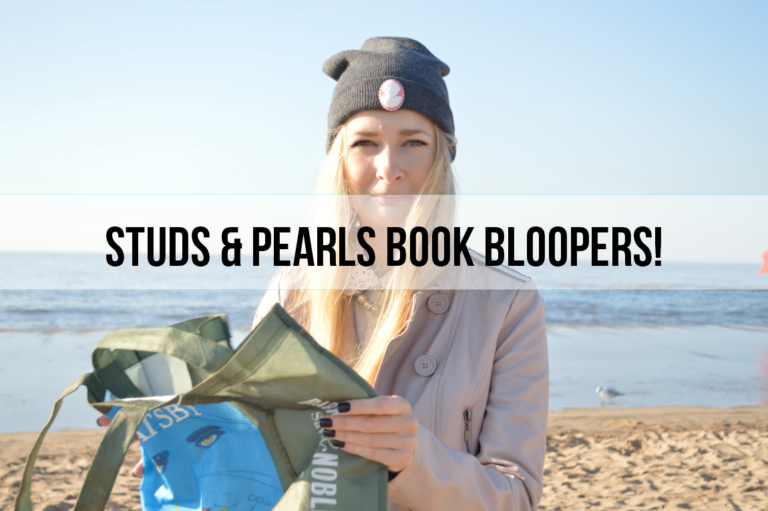 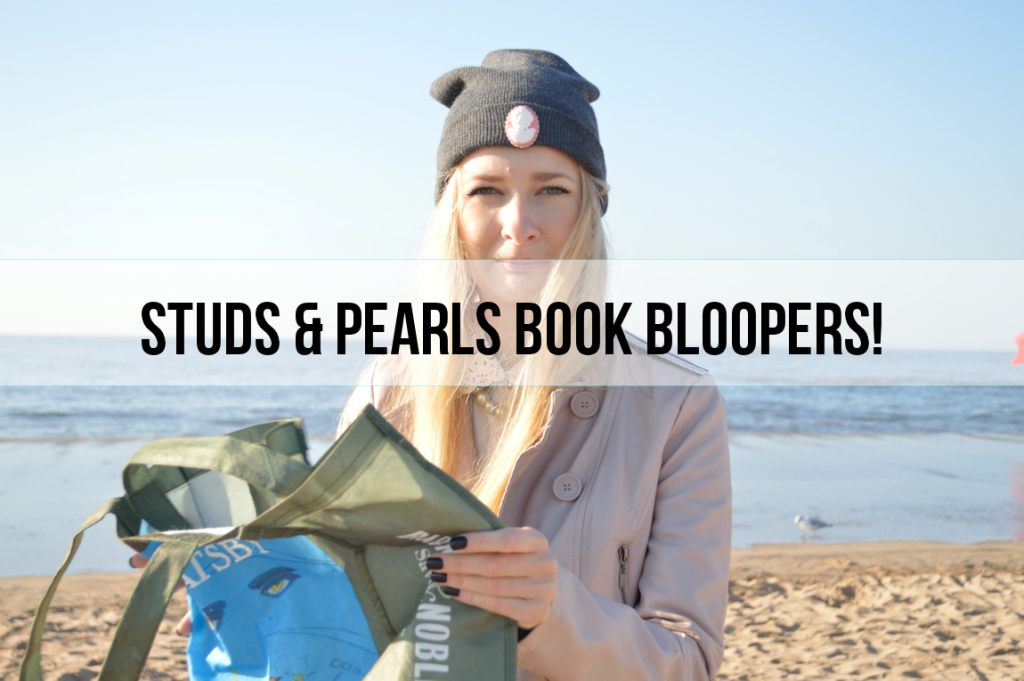 I have a couple rounds of content planned, all pertaining to different aspects of the book. FAQ’s and my experiences during the process, that sort of thing. But instead of posting all the serious stuff first, I figured I’d share the fun side of it instead. As stressful as it was – and as delirious as most of us felt half the time – I couldn’t be more grateful for the goofy, hilarious moments during each and every photo shoot. The making of this book was very “DIY or die”…everything was shot with my own camera and all of the clothes were either a project, from my closet, or from the girl’s closet. We didn’t really have a budget for that aspect, so it was all on me…and needless to say, I learned a LOT! We also had to search far and wide all over New York City and multiple towns in New Jersey to find the best spots. We dragged huge suitcases full of clothing (& my photography equipment) in the freezing cold…then later on in the year, in the crazy city heat. Onto subway trains, onto buses. I drove many hours into the night, and my car looked like a shoe and accessory closet. In the midst of it all, these photo shoots were the best part of writing this book.If it wasn’t for all of the laughs, I think my head would have exploded. The girls definitely helped keep my head on straight when I needed it the most. If you already own the book, you’ll probably be able to pinpoint the serious-print version vs. the goofy-web version. It’s like night and day, but in the funniest way. 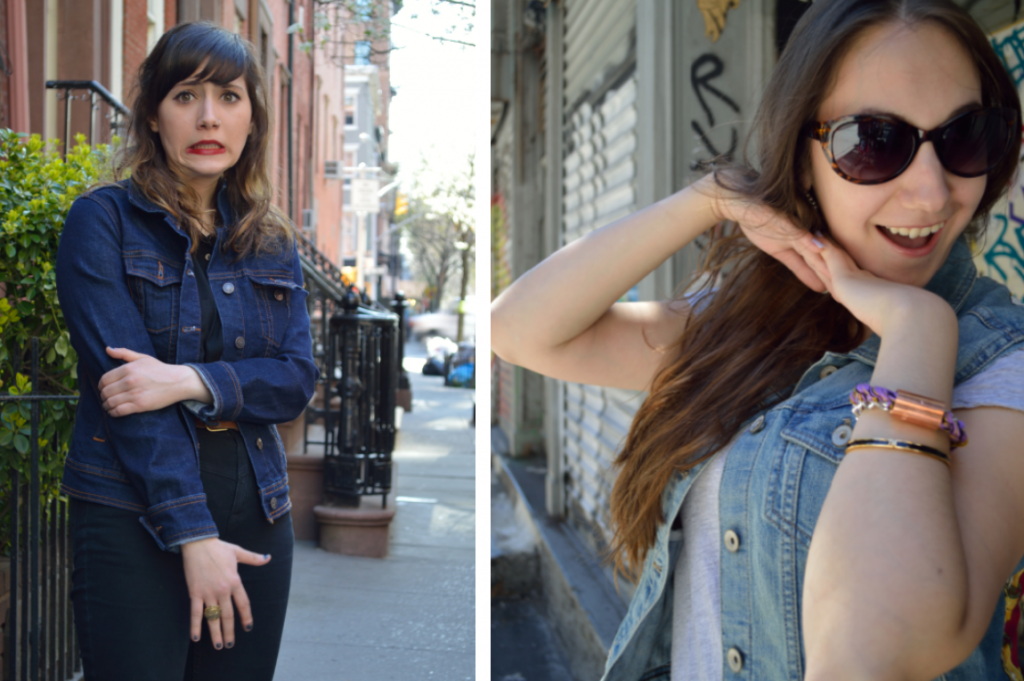 At each location, I had to assess our surroundings – make sure there weren’t any obvious signs in English (so the book could be translated) along with any brands or restaurant names. Getting sued really wasn’t really in my best interest. I also had to assess the lighting situation and figure out the best angles to shoot from. While I did this, I usually just had the girl stand there and hang out for a few minutes while I did my thing and took some sample shots. By the time I actually looked at those photos, I was always lucky enough to find some shots of pure gold: 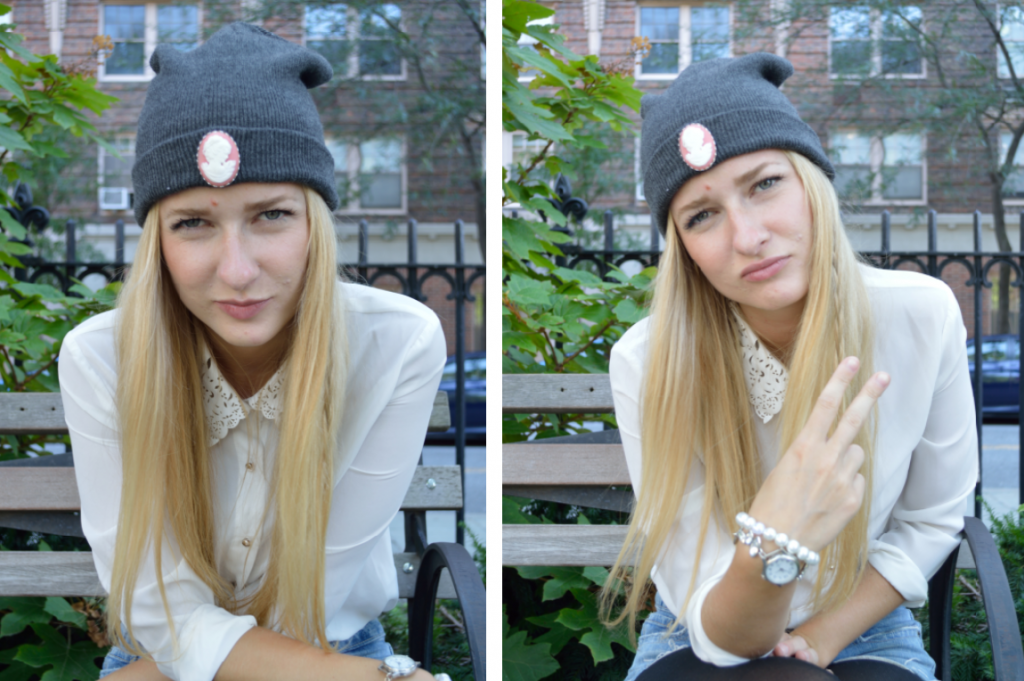 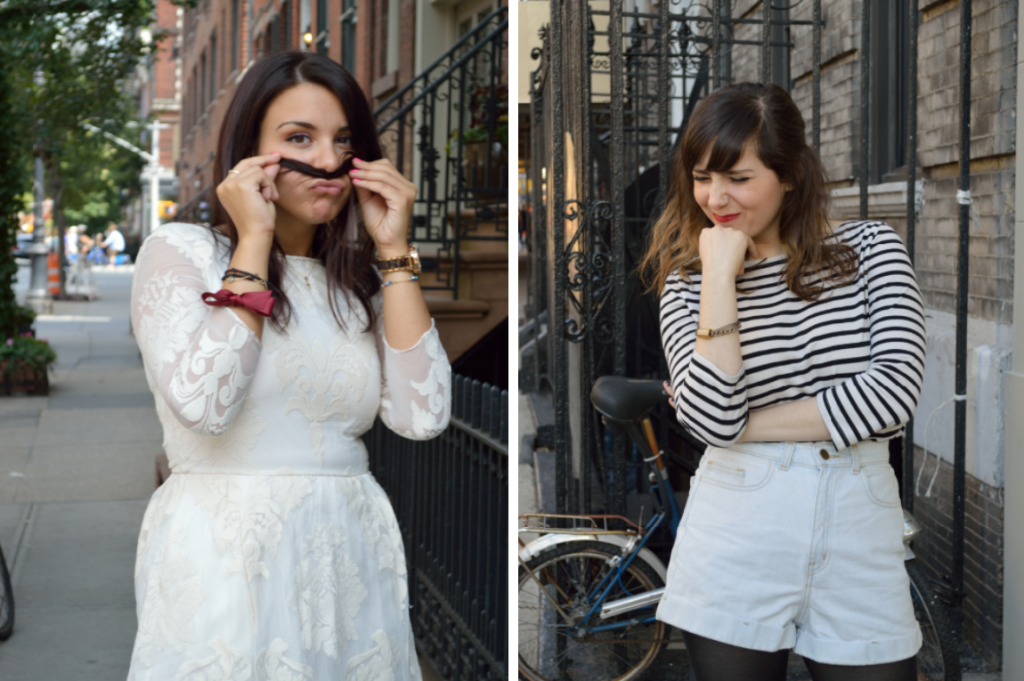 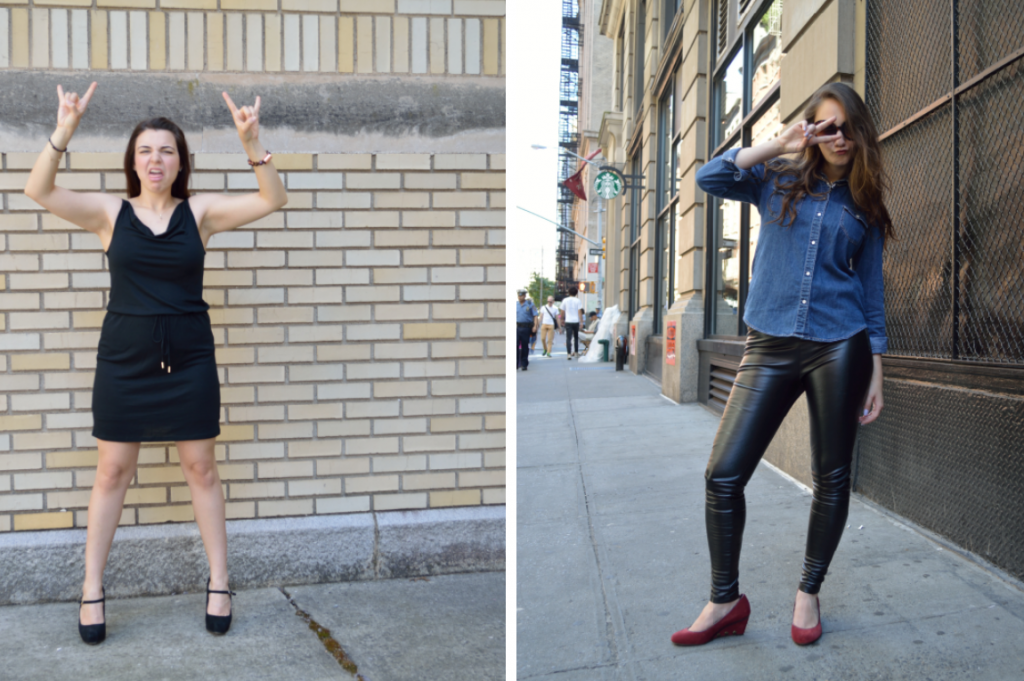 Right: Clearly, Amanda can’t not do this when she wears round Jackie-O sunnies and leather pants. 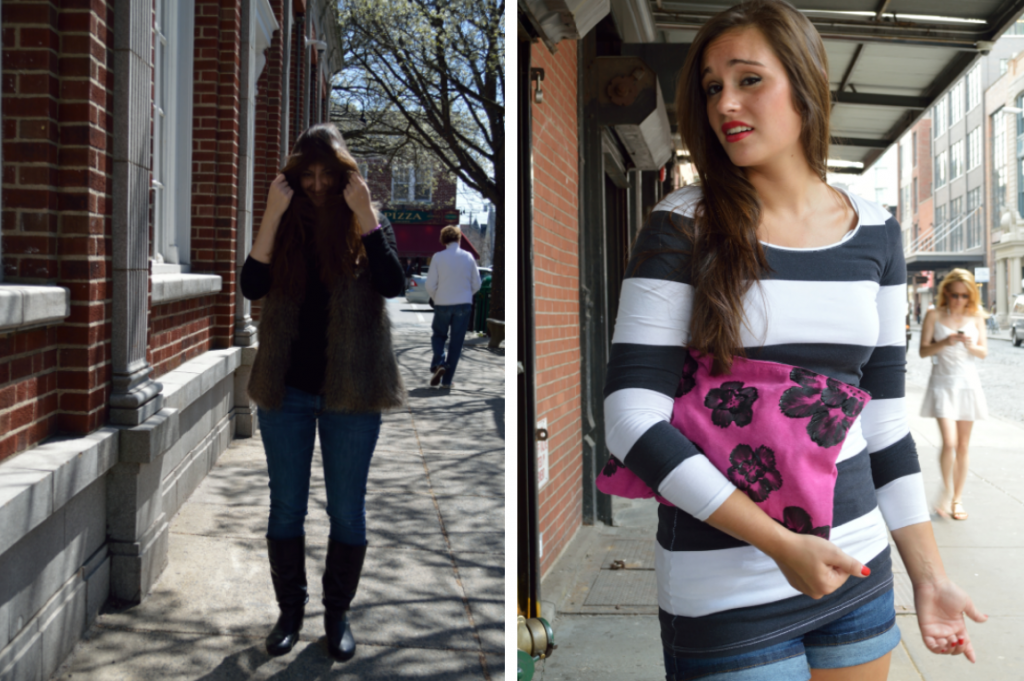 Left: I don’t know what Amanda is doing. And if you asked her, she probably wouldn’t know either. 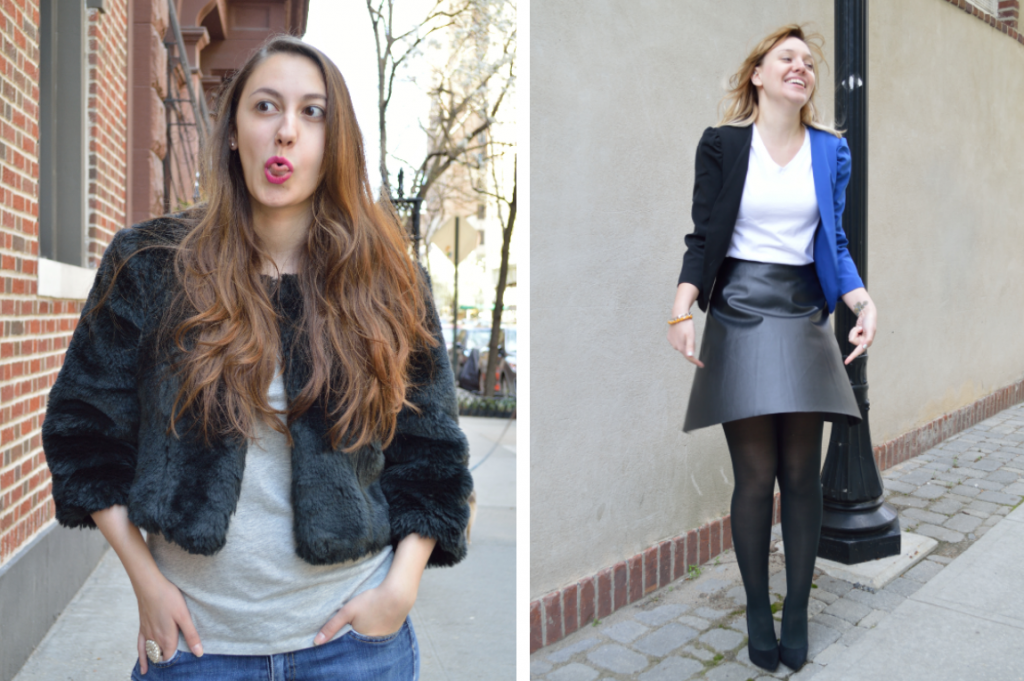 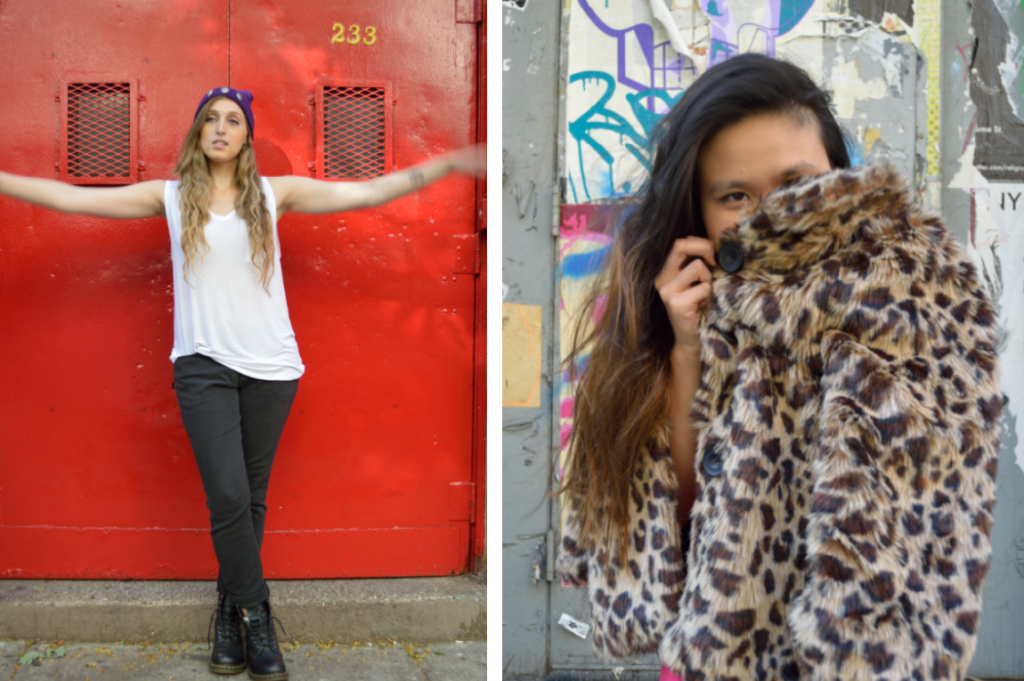 Left: Daryl, are you trying to fly?Right: Me hiding, or something like it. You would have never guessed the final “About the Author” picture was taken right after this. I blame Amanda for all of the giggles. 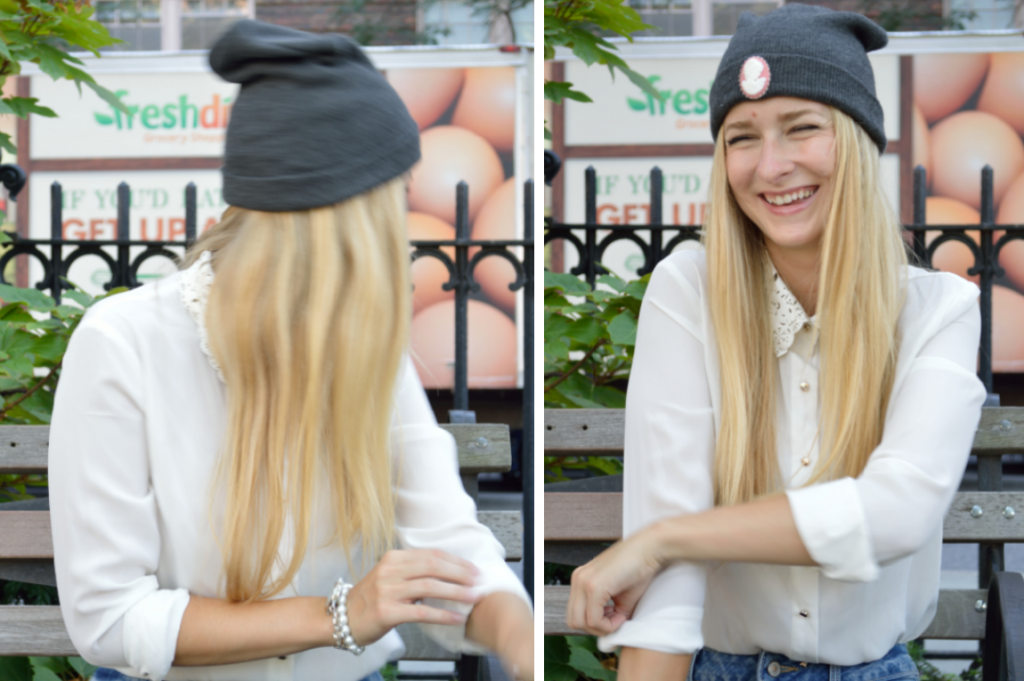 “Hold on Liv, there are eggs…behind you…” 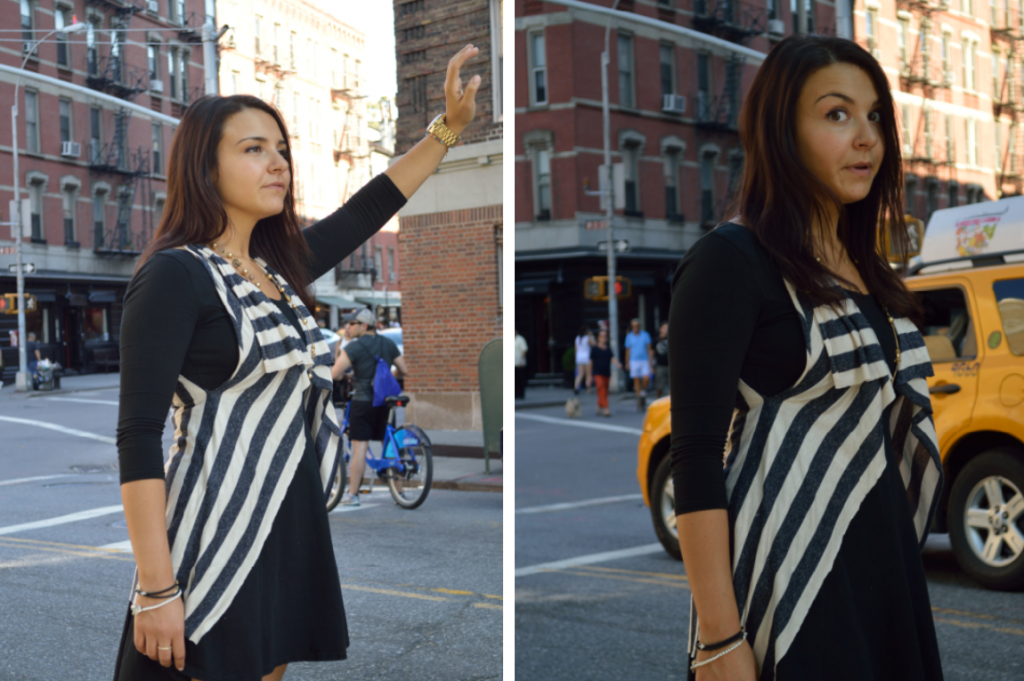 Kat pretended to hail a cab, which would have made a great shot. Not only can you see the side of the No-Sew Vest, but it was a very Manhattan thing to do. The next thing we know? A cab pulls up and calls us over from the stop light…uh, oops. Ask and you shall receive. 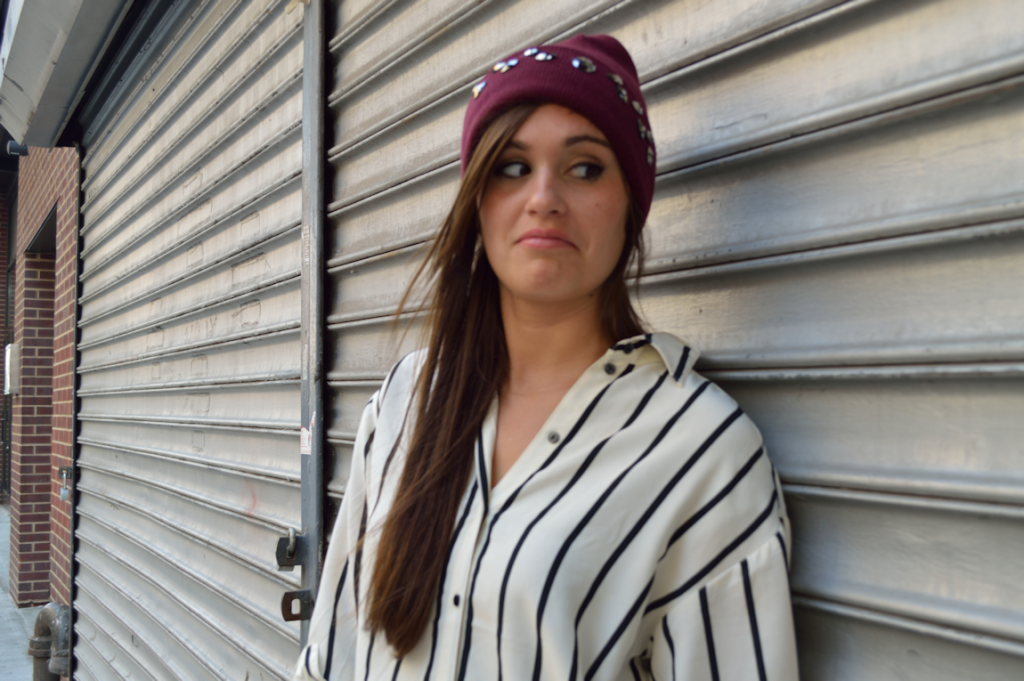 Brianna leaned back and shook the entire metal door… 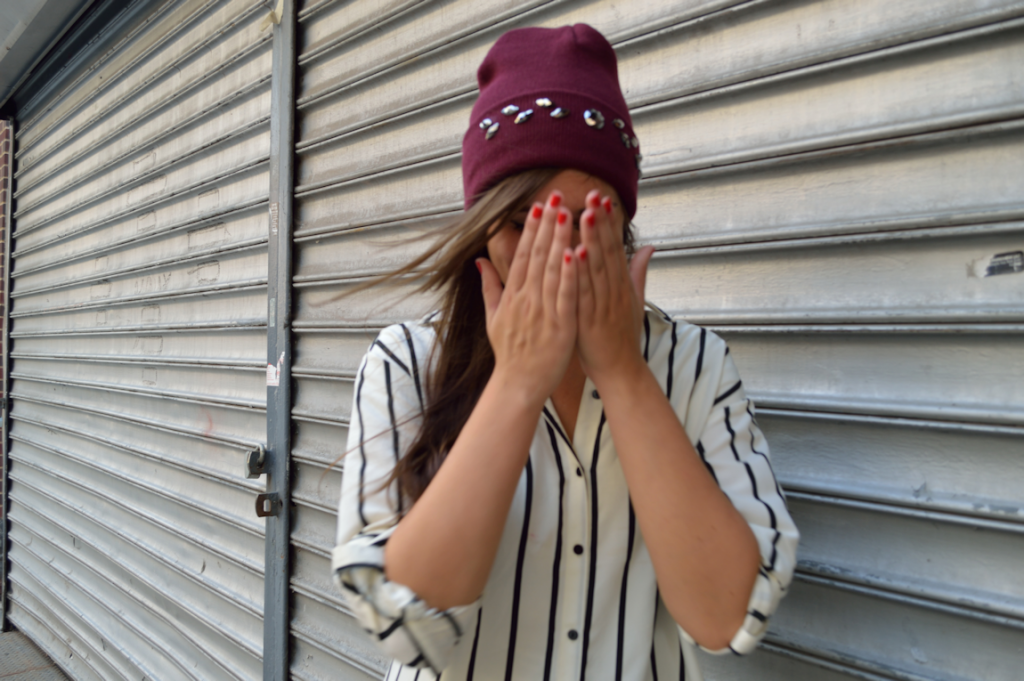 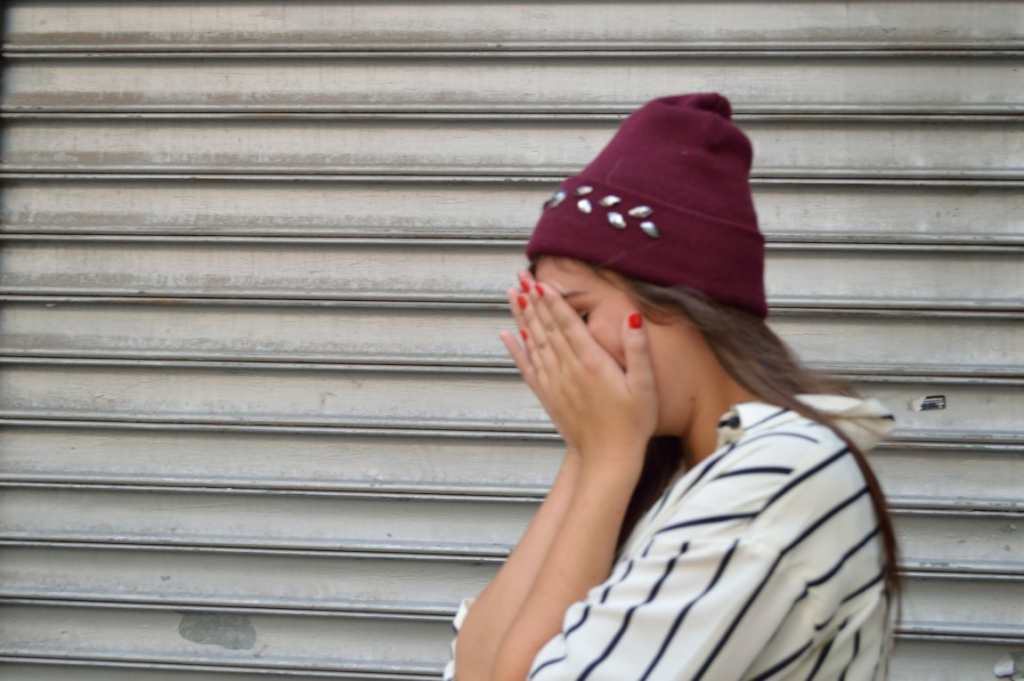 …which then started a laughing fit and hiding from the camera. 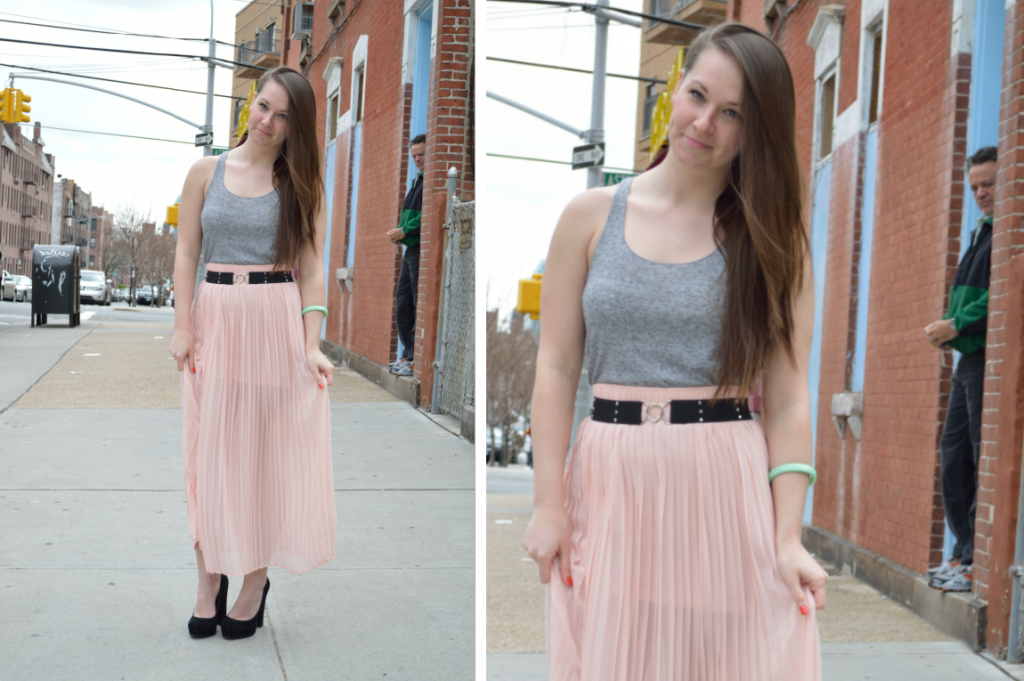 Who wants to play a game called “Who Can Find the Creep”…?!(On a slightly less humorous note, these street style photo shoots taught me quite a bit. Let’s face it, when you’re a bunch of girls taking pictures in public, people WILL make comments, or cat calls, or yell nonsense to mess with you. Even if you’re fully clothed and dressed tastefully. It doesn’t matter. People are nosy. You would think NYC residents would be used to the eventful nature of the area, but I’ve noticed otherwise. Of the 20+ photo shoots we did, there was also at least one cat call in EVERY town. The moment that tripod comes out  – a measly $30 one, I have to add – the heads turn and the mouths start to run. I probably should have done a social experiment, to be honest.

Once they see that tripod, they’re going to stare – which can be ignored, but let’s remember the safety aspect for a sec. In this particular case, this man didn’t ask us to move, but instead was probably just being really nosy. I even saw him in the reflection of my screen because he was standing behind me at one point, just staring us down. There were other instances where questionable individuals came up to us, asking to be in a photo or sometimes just lingering and staring. In cases like these, we got up and left. It’s uncomfortable, and a bit rude, and just downright unsafe to have a random stranger sitting in close proximity. My advice to anyone who finds themselves in this situation is to be mindful of your surroundings. There were some cases where strangers came too close to the camera – or worse, too close to us.

In the midst of everyone having fun, make sure you’re all aware of what’s going on. If someone’s staring you down…move. You can find another spot. It’s not worth getting in a sketchy situation! If someone starts to bother you, be stern – yet polite. I learned that a curt “we are working, thank you” almost always did the trick.

Even with the dude who tried to sell Amanda and I strawberry Pop Tarts. Yeah, that happened.) 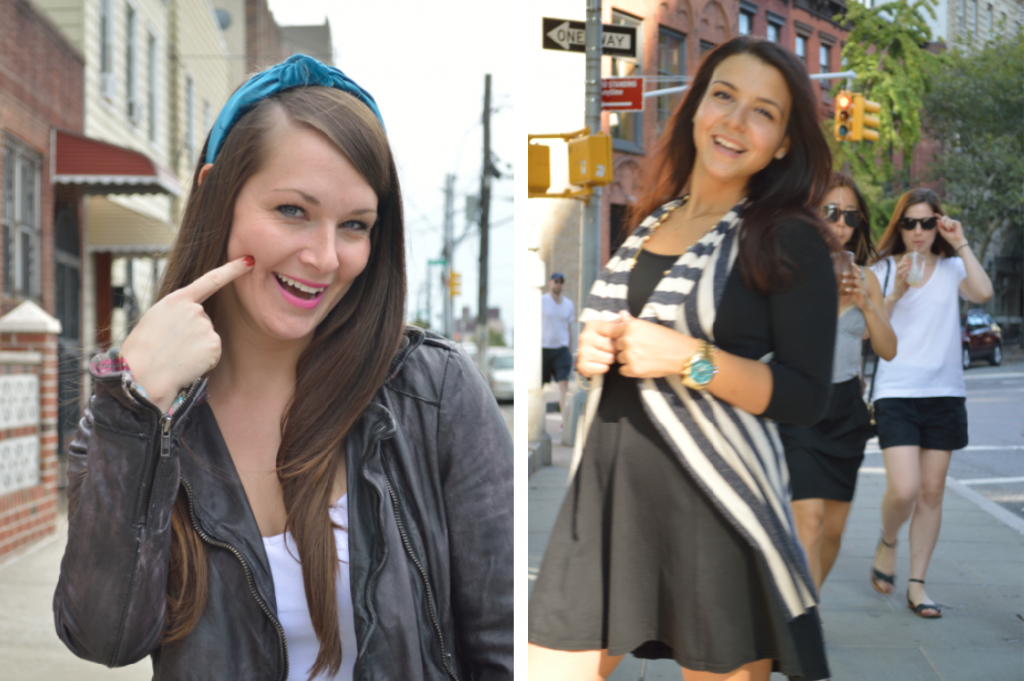 Right: People started walking towards us so I gave Kat a heads up. What does she do? Moves to the side…while still holding her pose. 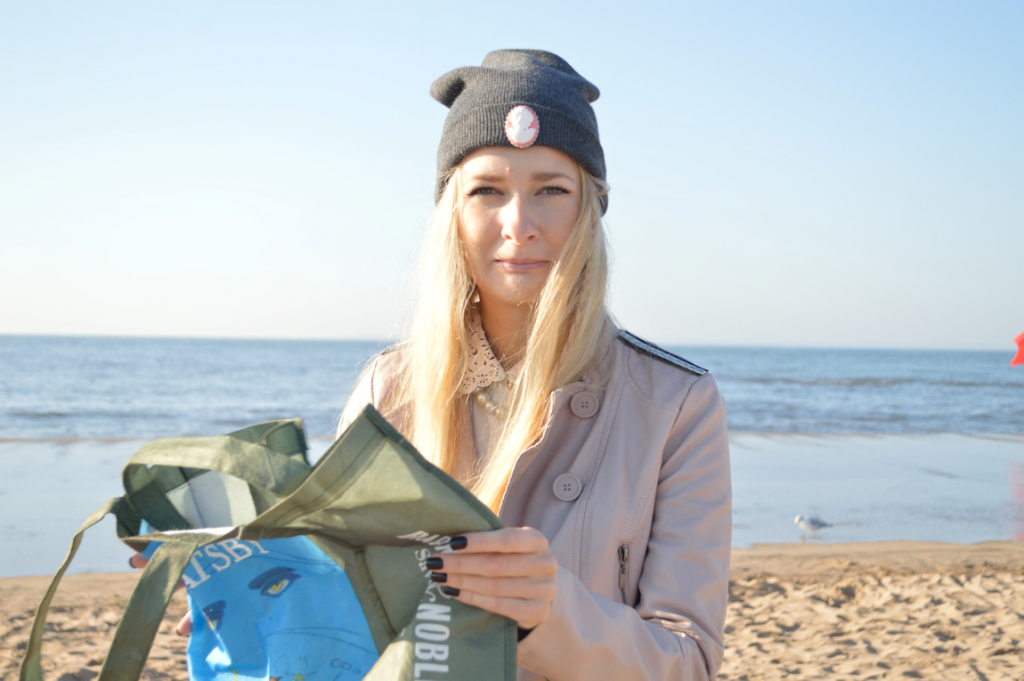 Early September 2013; one of the most memorable shoots was with Livia at 8am on Coney Island. It still amazes me how well this went, considering the time restraints and lack of “real” equipment…but hey, we made it work, and I can’t thank Livia enough!

Here’s what went down:

On about Monday/Tuesday during the first week of September, my editors came up with the cover concept, and asked if Livia can shoot it, possibly on Coney Island with the water in the background. This was pretty ironic considering Livia happens to live right by Coney Island, so it worked out perfectly. However, we had exactly one week to try and fit this last minute shoot in if I wanted this book to go to printing in time to be released late Spring 2014. If not, then it would be pushed to Fall 2014…! The real issue wasn’t so much the one week deadline – it was more so coordinating my schedule with Liv’s. The only day I had off from work was the day Livia was leaving for Slovakia (where she grew up). We had to be done by 9am in order for her to catch her flight!

It’s almost a miracle, how it all came together. We met up at 8am on the dot, then trudged through the sand to find a spot that didn’t have any decks or stagnant boats in the background. My main concern was the sunrise, which sure enough posed a problem. The sunlight was so vibrant on one side, which you can tell in the photo above. This is where Liv came to the rescue. See the bag she’s holding? I used that to carry the projects she wore, but she suggested that after I click the 10 second timer, that I run over to her side and hold the something up to block the sun. We tried with the bag a few times, but it was too small; I ended up going with her denim jacket. She also found a receipt in her purse and placed it on my flash to act as a diffuser.

It worked like a charm. In my panicky, stressed out state of mind, I would have never thought to do any of it. Liv was pretty stoked that her studies at FIT paid off in the most interesting way. 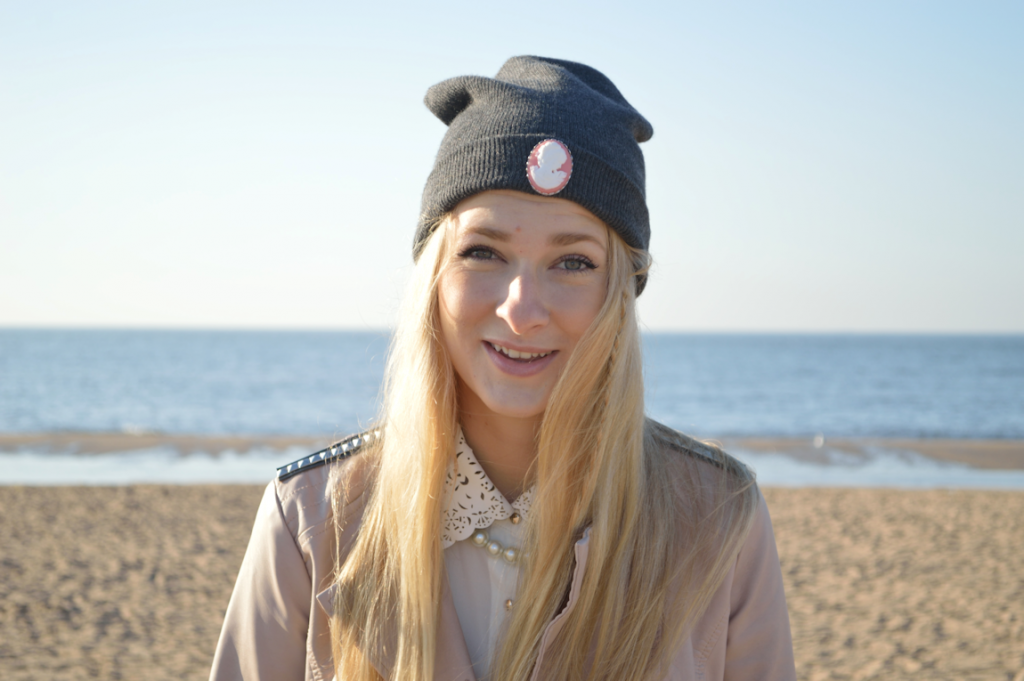 And somehow, Liv can give me a confused stare while still looking like a beauty. Share the wealth, lady! 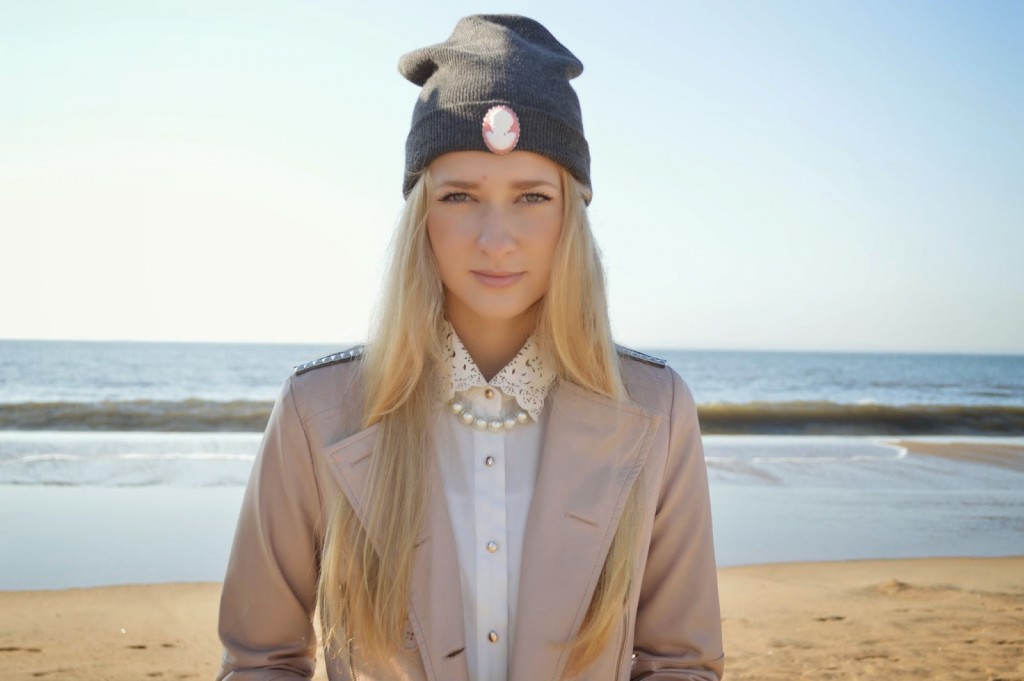 We parted ways at exactly 9am. I was amazed at how well the overall shoot went! This is the photo that was chosen for the cover. You would have never guessed I was on the side, holding up a jacket to block out the sun. You can significantly tell the difference in this one, in comparison the ones above. This is exactly why I say this book was DIY down to the core. 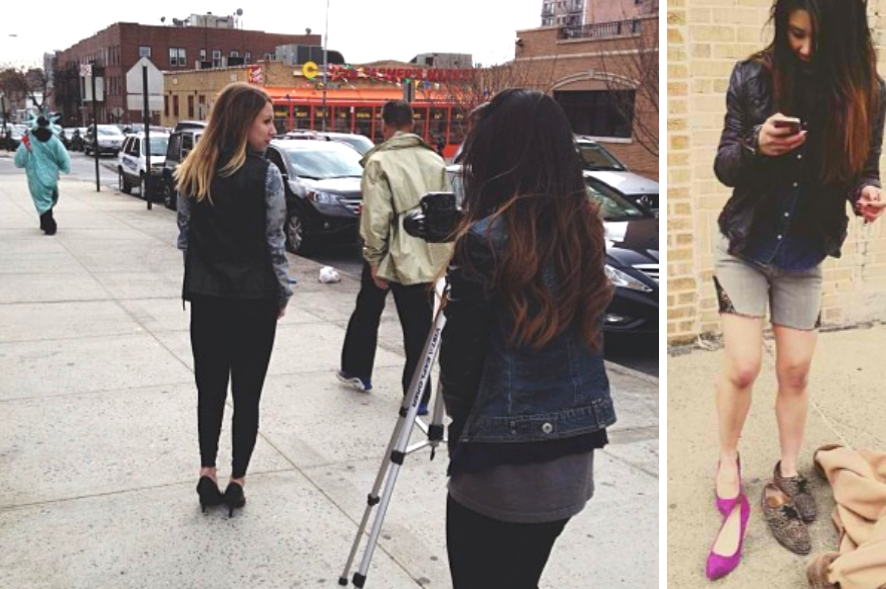 Left: “Hold on…the Statue of Liberty is about to walk by…” 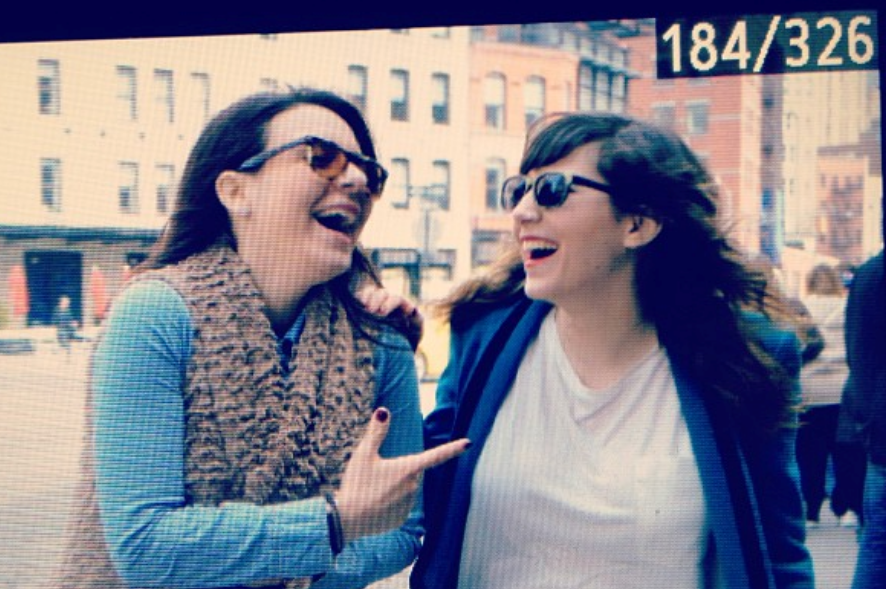